Drafts 34.0 has been released: 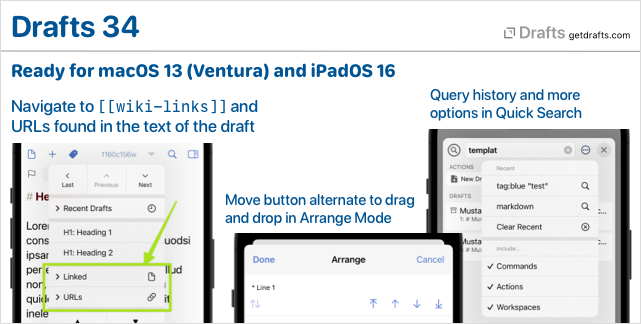 Drafts v34 update is ready for iPadOS 16, and macOS 13 (Ventura). Many features that became available for iOS/iPhone in v33 – like Focus Filters, the Library Summary, and the new Shortcuts implementations – are now available across all your devices. 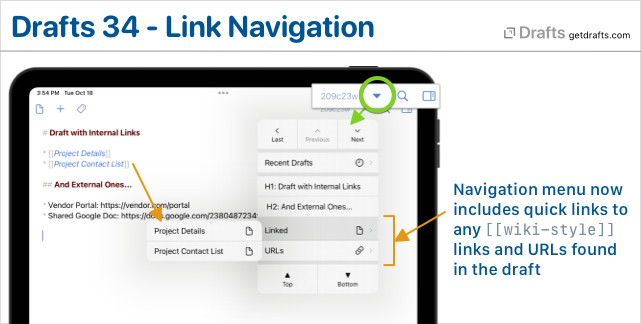 In addition to providing quick access to recent drafts, and navigation to headings in the current draft, the Navigation Menu now also includes submenus for:

Also, note that the URLs found in the draft can also be accessed via long-press on the link mode button. Learn more

Quick search is updated with visual improvements and a few new options. The (...) menu allows you to restore recently used queries and provides new options for whether to include commands, workspaces, and actions in your results. Learn more

Arrange is a great way to re-organize your text by blocks, lines, or sentences. This update enhances arrange mode with additional command buttons to move individual items up and down. Existing drag-and-drop operations still work as well. You can hide the command buttons if you prefer not to use them (in (...) options). Learn more

On devices that support Live Activities (iPhones running iOS 16.1 or greater), Drafts will now start a Live Activity for the current draft when pinning is enabled in the editor. This allows quick access to that draft in a longer research/editing session from the Lock Screen and Dynamic Island. If you prefer not to have activities created, disable this feature via long press options on the pinning button. Learn more

Other Additions, Changes, and Updates