Drafts 33.0 has been released: 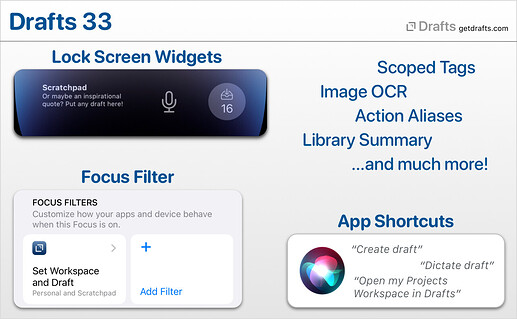 It is highly recommended you use the latest version on all of your devices if you are syncing data. If you have an older device which cannot support these operating system requirements, and you wish to run an older version of Drafts, please disable iCloud sync on that device.

NOTE: It’s a slight awkward time for cross-platform apps with iOS 16 released for iPhone, but not iPad, and macOS 13 (Ventura) not yet released. A number of these features will be available on an iPad if you are running an iPadOS 16 beta, otherwise will become available when iPadOS 16 is out soon. We will also be following up with a new macOS release enabling features like Focus Filters once Ventura ships. 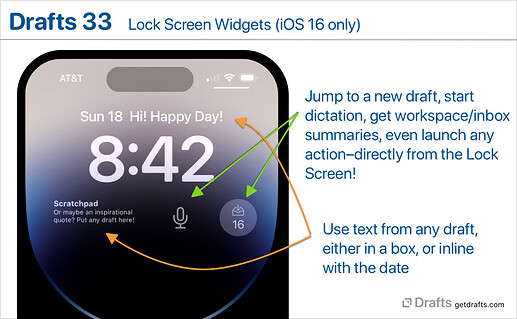 iOS 16 & macOS 13 introduce an entirely new way to build integration with Shortcuts. Drafts extensive array of Shortcuts actions have all be updated to use this new “App Intents” system. Mostly this should be seemless to you, the user, but it does add some nice new abilities, like the ability for Drafts to automatically provide a variety of shortcuts without any need for configuration on your part. These include quite a few Siri trigger phrases. A few examples to try:

NOTE: These changes are iOS 16 only right now, but will be available on iPadOS 16 and macOS 13 (Ventura) later this Fall. We have tried to maintain backward-compatibility of Shortcuts actions, but there are a few cases where there will be behavioral difference when running Shortcuts on iOS 16/macOS 13 vs. previous versions of the OSes. If you run into any of these, please let us know via support or the forums and we’ll help work through any necessary modifications.

iOS 16 introduced a new native text find-and-replace interaction. Drafts has adopted this as the default find interface in the editor, so if you trigger find (magnifying glass in Action Bar selector, or via action) the system find will appear. Drafts advanced find is still available on iOS 16 by tapping for options in the find view which appears above the keyboard, if you need advanced regular expression or other options.

NOTE: You can tap and hold on the quick search magnifying glass above the editor to get to “Find in Draft”, or directly to advanced find.

iOS 16 introduced new ways to configure popup menus, and Drafts takes advantage of these throughout the app where menus are used. Primarily a cosmetic improvements, it does make menus more readable in many cases. 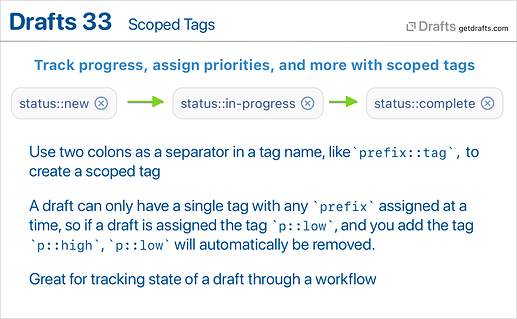 Scoped tags provide a special markup to have multiple tags treated as members of the same scope, and only allow assignment of a single tag in the scope at a time. Scoped tags are in the format prefix::tag. Drafts will automatically allow only one tag in a given prefix to be assigned to a draft. For example, if you a draft is assigned the tag status::new, and you later assign the tag status::completed to the draft - status::new will automatically be removed. This is a great tool for creating workflows tracking status or priority.
Learn more

The heading pretty much says it…much like Drafts can already do document scanning, or transcribe text from audio and video files, it now registers itself to handle images, and if you open an image in Drafts, it will offer to use OCR to transcribe and text found in the image into a new draft.
Learn more

Action aliases are quick way to create an action that references another action. If you have an action you want to appear in multiple action groups, but don’t want to duplicate it and have to worry about maintaining both if you make changes - aliases are a simple solution.

Create action aliases in the context menus on actions in the action list (right-click on Mac, tap and hold on iOS). Learn more 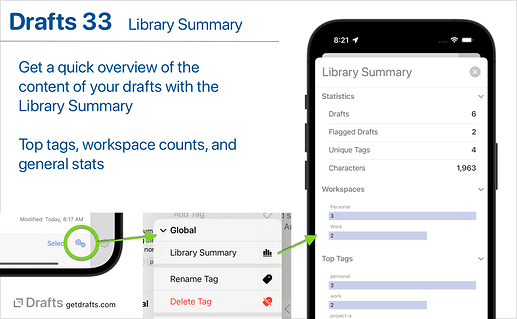 The Library Summary is a quick overview of library statistics, with charts of workspace draft counts, and tag counts. The summary is available only on iOS 16 or macOS 13 (Ventura). To access the summary:

Note the Library Summary is iOS 16 only right now, but will be available on iPadOS 16 and macOS 13 (Ventura) later this Fall.

Other Additions, Changes, and Updates

I am still having issues trying to empty the trash with drafts.

You should be able to still tap that button. The “Empty Trash” command is in the global commands in that menu.

You can also now tap and hold on the Trash tab at the top to get the “Empty Trash” command.

As a French guy, I love this release. Say 33 in French

Could you please open a ticket (support@getdrafts.com). Include crash log, if possible.

Same as well. Updated to latest and crashes every time opening Drafts.

Am I missing something with Filters?

When a Focus is invoked, the appropriate Workspace is switched on in Drafts. So far, so good,

But when the Focus is deactivated, the previous Workspace is not switched off in Drafts, it persists. Surely moving out of a focus should revert to no Workspace.

That behavior is intentional. As implemented, the Focus Filter is a trigger only when going into a focus mode. I’m open to feedback on this, but it would be difficult to completely, predictably, and not-potentially-annoyingly, restore state from prior to a focus mode change when exiting a focus mode.

You can setup a Shortcuts automation to configure Drafts when turning off a focus mode, even it is just to set the default workspace, if you are sure you want that behavior.

Drafts’ behaviour is different to filters in both Apple’s Calendar and the GoodLinks app which revert to no filter in the event that a focus is deactivated, whether this is due to activation of a different filter, or moving back to no activated filter.

In both, if you move to a Focus with different filters applied, these are activated.

If you move to a different Focus mode that also has a Drafts focus filter, those settings should get applied. Just nothing happens if you exit the previous focus mode, if that makes sense.

I understand what you’re saying, it’s just different from standard behaviour in the other comparable apps I use with filters so far and contrary to my expectations.

It makes no sense that if I deactivate a focus mode, that the changes enacted by entering the focus mode are not deactivated in this context.

I currently have 8 Focus Modes and Ir seems overkill to setup filters for all of them and/or setting up shortcuts automations for each.

I think that this is different from Safari where rather than filtering (as GoodLinks, Apple Calendar, Apple Mail, and Drafts do) it is activating a particular tab group with no obvious default reversion afterwards.

Not saying you are wrong. This was where I landed on the initial implementation, and I am glad to have the feedback from people using them. We’ll see how it goes as I hear more and play with some other implementations.

Sorry I missed this earlier. For me, deactivating a focus should revert to no filter/no workspace. Unless one is specified on the new focus selected

I’m not sure if this is the proper place to post but on the other hand it’s just a tiny bug so why open another thread?

Anyway: On the latest Ventura beta the latest Drafts beta’s Show main window at launch setting does not work—the main window is always shown wether or not this option is ticked.

I’m not sure if this is the proper place to post but on the other hand it’s just a tiny bug so why open another thread?

The Slack workspace is generally the place to discuss betas and you can report issues with the Drafts Beta via Testflight too. If you are not using the beta version of Drafts, with the macOS beta, then you should switch to that as it will include the latest pre-release changes for Ventura compatibility.

In terms of opening a separate thread, doing so keeps every topic self contained and ‘clean’ and is easier to find go others as it will directly relateto the topic title.