Drafts 27.0 has been released:

It is now possible to select custom light and dark themes for Home Screen (iOS) and Notification Center (macOS) widgets from the built-in and custom themes you have installed in Drafts. To make changes, tap and hold on a widget, select “Edit Widget”, and make changes in the widget configuration. 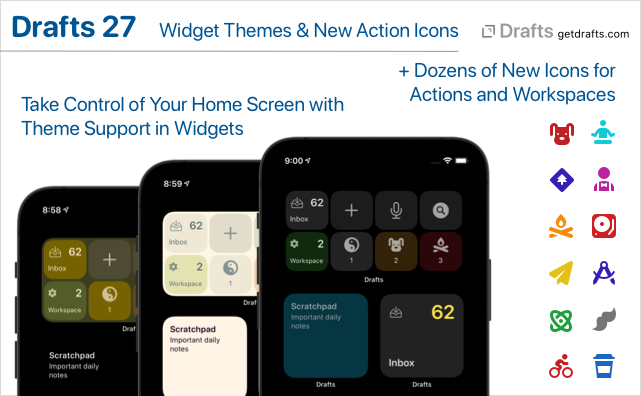 We have also added dozens of new icons for actions/workspaces in categories like Health, Animals, Education, Email, and more.

If you create custom themes, you may wish to add the following new keys in colors.interface: widgetBackground, widgetBackgroundAlternate, widgetForeground, widgetForegroundAlternate. If not present, these values will fall back to existing related keys: background, backgroundCollection, foreground, so existing themes should work out of the box without updates.

Google Tasks and Microsoft To Do Integration 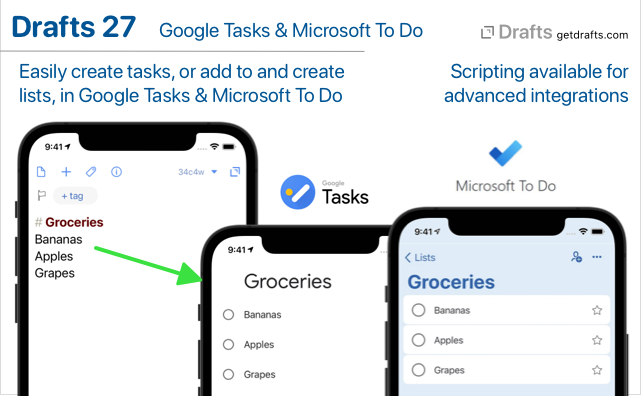 Both services are available via scripting, with powerful script objects with convenience methods for creating and updated tasks and lists, while also exposing the full APIs to advanced users.

For sample actions and details:

Arrange mode has better external keyboard support, especially on iOS, including:
- Esc and ⌘-return to cancel or accept changes
- Arrow keys navigate up-down in the list
- ⌘-up/down move the selected line up and down in the list.

Other Updates and Fixes

The addition of Google Tasks is really nice. Although I use Todoist as my task manager, Google Tasks’ ability to appear in a side panel when working in Sheets is really handy. Having Drafts integration now makes it easy to run “repeat/rinse” setup checklists without having to import a “checklist” tab into Sheets itself. These also follow across to my Chromebook too. Great stuff.