I often receive a bulleted list of agenda items for meetings that I copy and paste into Drafts. I would like to figure out an action that would take this list and add blank indented sub-bullets to it. 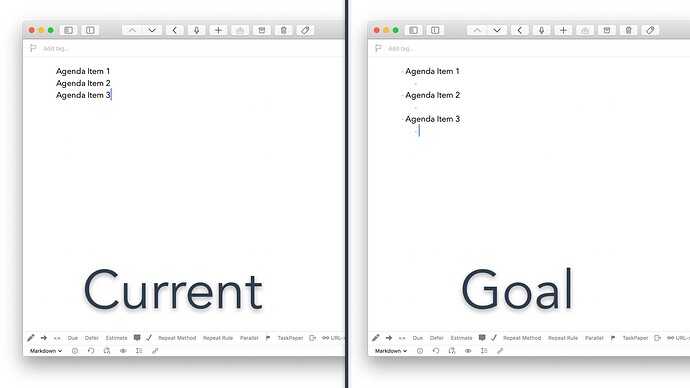 I thought’s @agiletortoise’s Markdown List action would be a good place to start, but it is a much more complicated script than I am comfortable editing.

Okay, I’m sure someone else will suggest a far more sophisticated solution, but if you’re willing to experiment off the back of a suggestion, try this script step in an action:

Super simple, nothing fancy. This assumes you don’t have anything else in the draft, as pictured. If you sometimes start with a title, it wouldn’t be too difficult to adjust to ignore the n line(s). Also could be adjusted to work solely on selected text. Or could even be set to run on the clipboard instead of the draft, so instead of copying, pasting, and then running the action, you could just copy, then run the action and produce a new draft with the copied text, bulleted and indented… Possibilities!

This is a quick solution and gets my engineer’s approval

I will be running this inside of a larger draft on selected text, so I will work on building that part. Thanks for giving me a starting point!

It seems like it is working! How did I do?

At the end of the day, as long as you can use and maintain the code, then that’s all that really matters, but I would suggest the following in terms of potential modifications.

Excellent feedback, thank you! I was trying to look at another action and add similar code in to this one. I see now were things got sloppy.

I updated the code with your notes and it still works (not a comment on your suggestions, just on my execution).

The sweet spot for commenting seems to me to be 3 months after you wrote the damned code.