Auto clear versions of drafts archived and older than one year

For some reason I’d like to keep some archived drafts yet I only need the content, not the version history. It would be much better if you can provide an option that automatically clears all versions of any draft sits in archive category for over one year. Otherwise I have to clear versions manually one by one.

Quick question Why do you “have” to clear the version history at all?

I use drafts daily but I almost never go into the versions. The few times I do… I’m glad they are there because it means i botched something. Why would you want to get rid of that?

To save space in iCloud storage.

I use Drafts for journal and task management and have written a bunch of actions and scripts for that. Basically I create a draft each day and edit it frequently in one day, and usually end up with more than 100 versions at the end of the day, sometimes over 200 versions. The journal gets archived when the next day come and I only need the final version of it after that. Also I don’t trash old journals as I may need to search for something in the past.

One day I found out my iCloud space is not enough and Drafts eats up most of it. And I bought more iCloud space (5G -> 50G) and pay for that every month. Drafts took 3.5G space earlier this year and now 10.5G and I’m conerned for its rapid growth. I assume that deleting 100+ versions could significantly reduce the space a draft takes. (correct me if I’m wrong about this)

Here are some screenshots of my iCloud storage and draft versions. 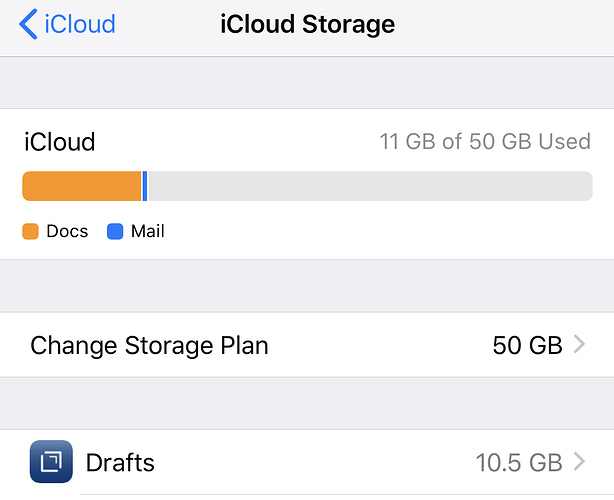 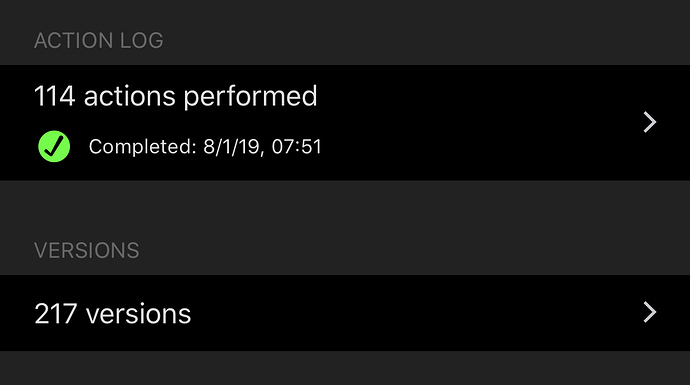 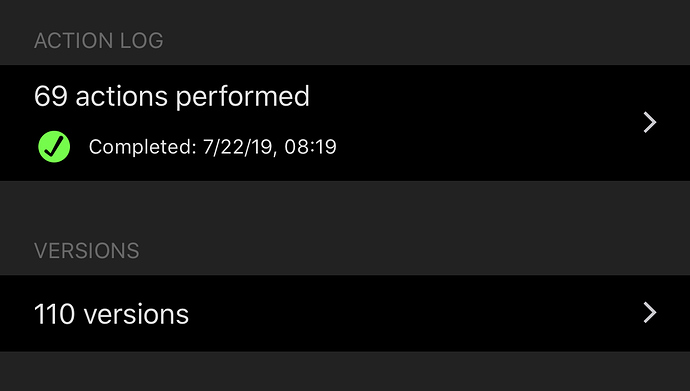 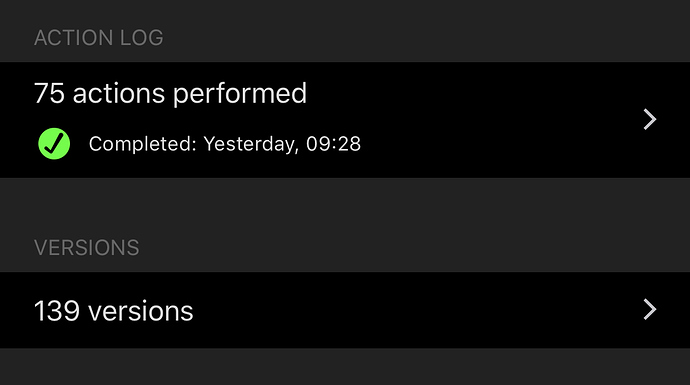 I’m convinced you need to purge your versions if that’s how much space you’re using for plain text.

Each draft has an option to clear versions, but manually doing that at scale is going to be painful.

Just an idea, but if @agiletortoise could expose a scripting function to do the same clearing, that would be a simple script you could run in batch against any set of Drafts. You could write an action script to do it specifically against older archived drafts too as per your request; it would just be a manual trigger rather than automatic.

Exactly. Totally agree with you. Hope this feature comes soon.

If Drafts is using that much of your space, it’s probably not just your draft data and versions. They really don’t take much space.

Do you have automatic backups enabled? You might just need to clear out your old backups in iCloud Drive/Drafts/Backups. Anything stored in that folder counts in the iCloud data numbers.

No. I just checked and backup is not enabled. I don’t have any backups actually. I also checked iCloud Drive and no folder named “Backups” exists. 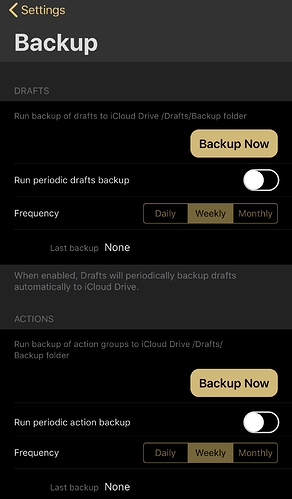 Is there any additional information I can provide to help tracking this issue?

I wonder if running a backup might actually be useful to get some insight?

The backup files are JSON and look to contain only the latest version of a draft. But, if you could estimate the average number of revisions then you could determine what size a backup file that theoretically included multiple revisions would be. i.e. your entire set of Drafts in an uncompressed format; I’m assuming that the actual Drafts draft storage in iCloud Drive might take advantage of some compression, so this figure gives you the worst-case scenario.

For example:
If you estimated 150 versions on average for a draft, that would mean your backup file would be about 70 MB if you were going to reach the 10.5 GB mark.
Assuming large drafts coming in at 0.05 MB (my average is a little over 0.01) that would come out at about 1,400 large drafts each having 150 versions and being stored with no compression.

If that backup and scale-up isn’t anywhere close to the 10.5 GB of data, then it would suggest that there’s something more at work here than versions.

Here’s a couple of utility actions that might help you clean up your drafts list if you want to save space:

They both scan for drafts and generate a new draft with links to the ones found matching the criteria (they prompt for exactly what to look for).

Thanks! Looks helpful and promising. I’ll try that.

After reading your replies it occurs to me that creating a new draft with same content and trash the old one with many versions may be a valid solution.

There an option to “Clear Versions” in the version history screen on iOS, too.