I installed drafts 5 alongside 4, and I see the drafts 4 watch app (and can install and uninstall), but don’t see a drafts 5 app in the Watch app list.
Am I missing something? (I have upgraded to the Pro Subscription if that’s relevant)

It should be available. Here’s what I currently have… 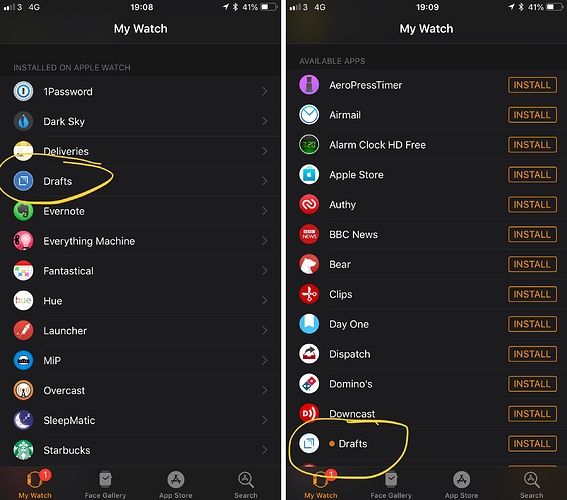 One note from my side is that I originally removed D4 and put it back after I’d installed D5 - just in case that turns out to be a factor why I do see both.

The installed apps are grouped above the ones not installed, did you scroll all the way down?

Good question, but yes, I scrolled to the uninstalled apps.

I also tried uninstall / reinstall of drafts 5. I have not yet tried removing drafts 4 - want to make a backup first.

now that I think of it, I also have drafts 3 installed.

I restarted the phone and drafts 5 appeared in the uninstalled apps list. From there I was able to install without issue.

I’m also having the same problem

Is that true after trying what @Scottd did?

I had to do the same thing. Restart phone and it magically appeared. Wonder why?