I have recently updated to Drafts 5. I use the standard action Append to Evernote Journal. I keep the Journal in a dedicated Evernote notebook and Drafts 4 would write to that but it seems that the action now always sends to my default notebook. Is there any way to change this? I can’t remember whether I did anything in Drafts 4!

Edit the action. It has a single step. Set the notebook entry in that step to the name of your desired notebook. 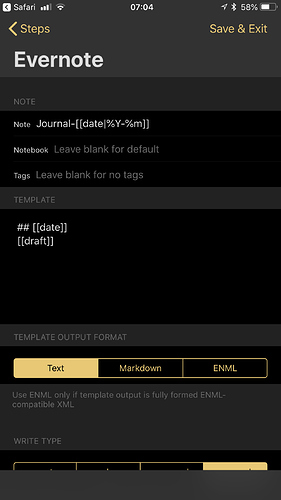 Thanks, but it appears I need Drafts Pro to edit actions.

Yes. That’s one of the important changes to the freemium model in v5.

Oh dear! I wouldn’t have upgraded if I knew that.

Nothing to stop you still using v4 and even calling v4 from v5.

Take a look at the v4 to v5 info for details on the move.

Thanks for your help. I’ve reverted to Drafts 4 (with regret!)

Having reinstalled Drafts 4, it seems to me that the action there sends to a notebook called Journal, whereas in Drafts 5 it sends to the default Evernote notebook. It’s not a big deal but not quite the way I like to work.