Actions on the Mac Update

This is just a quick note to update folks on the status of actions on the Mac. They are coming along nicely. An early beta version has been distributed to a small group of testers, and I will posting a public beta to the next week or two. Details will be posted here to the forums when it’s ready. I hope to have a final release ready before the end of 2019, barring any major unexpected hurdles. 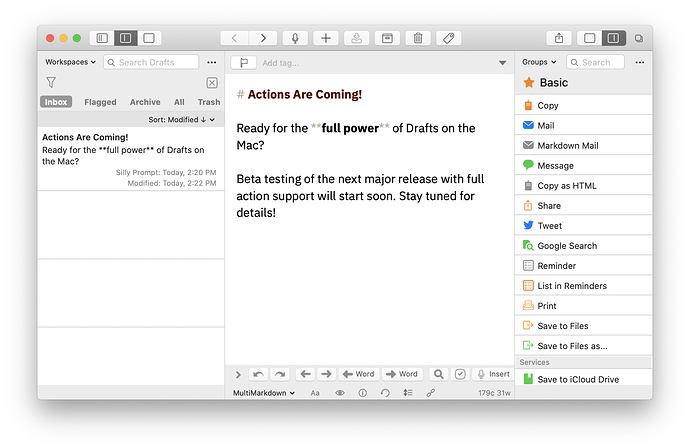 To set some expectations, first off, most things just work. Action sync across platforms, and the vast majority of the action step types and scripting interfaces work on the Mac just as they do on iOS.

There are a few exceptions, and a few caveats…these are the most notable ones:

More details to follow with the beta release. Look forward to getting this into more people’s hands for testing!

If I were writing an action in javascript that had some sensitivity to the differences - for example in URL schemes - how would my code tell whether it was running on Mac OS or iOS?

There are platform and model properties on the device object

Could the Evernote action step be implemented locally on the Mac with AppleScript instead of hitting their API? Or alternatively, any plans for an action step to execute an AppleScript so that a user could implement this?

Ability to run AppleScripts is something we hope to add. It’s very convoluted to implement due to Sandboxing restrictions.