Action to Pick from Multiple Actions

So I have a few actions that will send text to a Reminders list. Is there a way to create an action to choose from those actions? That way they don’t take up as many slots in the action bar on the right. (I hope this makes sense lol) Thanks!

What you want is a Prompt action. You can turn off the setting for entering text, and in the next section, add an arbitrary list of buttons separated by pipes, e.g.: 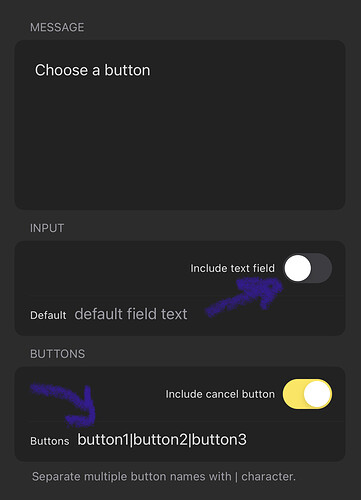 Awesome thanks. Follow up question: after I make my buttons how do I get them to run the specific Drafts action?

Based on the same principle, I can offer an alternative approach based on something I made available via my action group suite.

The ThoughtAsylum action group includes a helper action called TAD-Action Menu. This is intended to simplify how to build exactly this kind of approach, and give users a bit more power in doing so. It builds a ‘menu’ of buttons in a prompt window and executes an action based on which button is selected.

Here’s the actions’s description, but I’ll explain a bit more below.

This is a helper action called from another action that sets up several template tags to populate the menu.

There is an example action in the ThoughtAsylum - Power User action group called TAD-Info Menu that you can clone to build your own action menu.

It uses actiondisplaynames and actionnames template tags to list the buttons and the actions they trigger (first line in one maps to first line in other, etc.

It uses prompttitle and promptmessage template tags to specify the name and message for the prompt the user chooses from for which action to run. 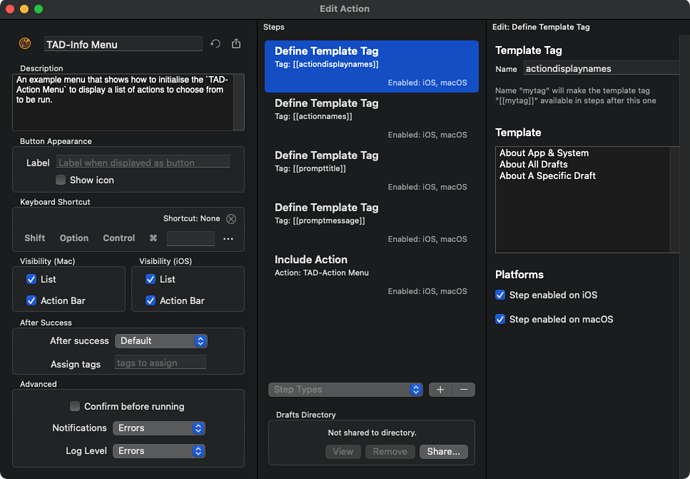 There are five steps in this action. Four that set-up the settings that you want to use for configuring the menu, and the final one that calls the TAD-Action Menu action to build and show the menu.

The four actions that set up settings are as follows:

If you download the action groups referenced, you should be able to clone the example TAD-Info Menu action and make some simple modifications to create your own.