Hello, I would like Drafts 5 to be able to present the contents of an existing draft within Siri and have Siri read the contents of the draft. I think this should be possible since some apps, e.g. CARROT Weather can do something similar. 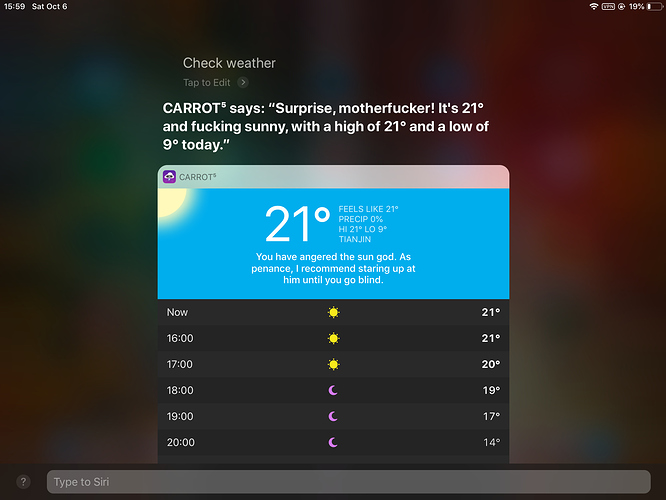 My use case is including the contents of a draft as part of my Morning Routine shortcut. I want to invoke Siri with my custom phrase and have Siri give me a morning report on several things, one of which is the contents of an existing draft. This draft contains some personal data and I update its contents using Shortcuts.
Please consider adding this feature if it is possible. Thank you in advance!

You can actually do this with Drafts and Shortcuts, granted it’s not as neat as doing it entirely within Drafts, but it’s possible.

You’ll need to copy the UUID of the Draft, and then add it to the Shortcut when it asks you during the import: Morning Draft Example.

To copy the UUID of the Draft tap the Ⓘ, and then the UUID option that appears.

Oh hi Rosemary, thank you for your reply and I love your Automators podcast!

Your example shortcut is similar to what I managed to come up with so far, but I want to find a way to show the contents of a draft within Siri because ideally I want Siri to run multiple shortcuts as my morning routine, something like this: 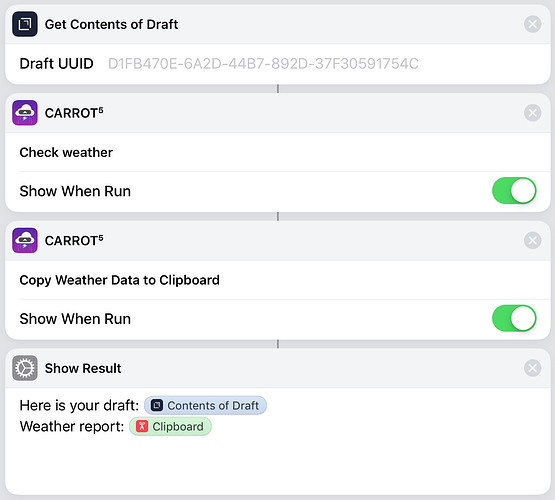 However, since Shortcuts needs to launch Drafts to get the contents, Siri will not be able to speak the result. Instead, the shortcut will continue in Shortcuts and the result will be an alert.
Correct me if I’m wrong, but I think it is possible for Drafts to add support for presenting the contents of a draft within Siri, similar to the way CARROT does it, right?

Anyway, thank you for your reply and your great work!

Add a “Get text from input” and a “Speak text” after your get Drafts contents step and that will speak the content of your Draft, or save it to a variable (or use magic variables) for later speaking in a combined text block.

So I just found out Drafts actually is able to show the contents of an existing draft in a custom UI in Siri. You just have to tap the i icon at the top left corner of a draft and add it to Siri.
I guess my feature request then becomes allowing users to copy the contents of a draft to clipboard after the preview. This approach is very similar to CARROT Weather’s Check Weather then Copy Weather to Clipboard approach.

Hello and thank you very much for your reply!