Is it possible to create an entry in drafts via email?

Here’s what I am trying to do:

I run my life mostly via pen/paper. I am a recent convert from OmniFocus. I used to use my Alexa to send my TODO list tasks to OmniFocus. I would like to continue to do that, but instead, create entries in Drafts, since I am in and processing drafts from everywhere anyway.

Drafts has no e-mail interface.

You could maybe use a web service like IFTTT or Zapier to create an iOS reminder and then have Drafts import that on next open (Reminders Import under Settings).

would this work on the MacOS product too? This sounds like a good idea.

I would have said no, but there’s an interesting update in today’s beta release. 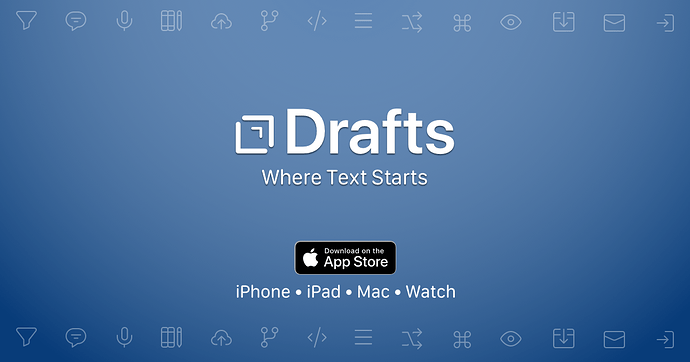 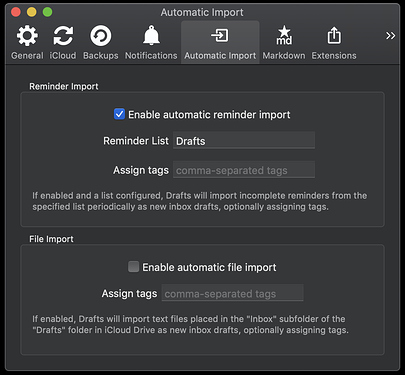 On a related approach, the file import offers up options if you can coerce your Mac into writing the content - from something watching your mail app, or from a web integration system (IFTTT, Zapier, Flow, Integromat, etc.) to write to a cloud storage provider (I don’t think any have iCloud support currently, but I could be wrong). If to an alternate storage provider, then you could use an app like Hazel to automatically move the content over to the file import folder.

thanks @sylumer for pointing out there is a daemon that watches over an iCloud inbox folder.

@serigo_101 any headway on implementing a workable solution? what did you settle on?

I, too, would love to see an email gateway like OmniFocus (Asana and Evernote to add 2 others!)

This would be a very effective workaround to not having Drafts for Android and avoid having to leave Drafts running on my mac.

I would be able to email my transcription from Android’s Recorder (which has amazing dictation, indexing and search capabilities!) directly into Drafts!

I, too, would love to see an email gateway like OmniFocus (Asana and Evernote to add 2 others!)

They all manage the data for their services. Drafts does not, it is held by Apple’s iCloud platform. Without you being authenticated to something (like your Mac) to do the data shunting, you would need to have something that authenticates you to iCloud and writes directly to your Drafts database.

Maybe it’ll come one day, but Greg would need to develop a whole web-back end platform to support this sort of thing.

This would be a very effective workaround to not having Drafts for Android and avoid having to leave Drafts running on my mac.

As far as I know, none of the usual web services support iCloud Drive, so that leaves you needing something like a Mac and Hazel as I originally suggested to go the file import front.

Another way that is roughly equivalent, and what I currently use, is the even older Apple Reminders import functionality. It works the same way as the files import, but takes the draft content from a reminders list.

I login to iCloud on the web and add my content to reminders directly, but I’ve just done a few checks and I was able to replicate the process end-to-end by setting up an IFTTT applet.

The applet is set to receive e-mails (from my registered e-mail address) tagged #drafts in the subject line and add the body of the mail to my Drafts import list in reminders. Then, opening up Drafts on the device I have set to do the import, the e-mailed in information is imported and appears. I wouldn’t be surprised if there was a size limit, but I’ve not encountered it in my day-to-day use as yet.

Personally, I think an email gateway is a blunt instrument. And a costly one for @agiletortoise to maintain.

And the use case seems to me limited to platforms where there is no Drafts client. I suppose Windows would be that client. Then I’d want to use Pushcut to create the draft - on a tame iOS device.