I’m currently experimenting with Drafts scripts. I wrote a script which reads the file names of all files in a folder. Afterwards the path and file extension is deleted from the string and the file names are put in a promt to select from.

Everything is basically working up until I hit 9 files in the folder. For some reason listContents does only show 8 files. If i remove one then it shows the 8 remaining. I could find nothing explaining this behaviour in the documentation or forums so far. Anyone else has experienced the same issue?

The code that generates the list is as follows

Thanks for your help

I ran your code, but changed it to refer a folder I have with lots of files and I got more than 8. 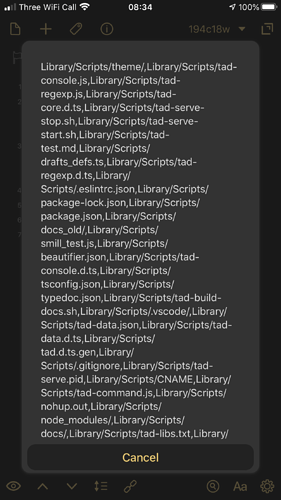 Have you tried a different folder?

I’m wondering if there is something unusual about one of your file names that is causing an issue.

I am confused. I swear I tried it out all night yesterday. Ran it again a second ago. Didn’t work. Then I deleted the folder and remade it with different files. Now it is working. I recopied the original 9 files. They are working too.

My problem is solved I guess. A bit unsatisfying but I am not complaining

Thanks for your time and help.