Would you consider moving the buttons on iPhone as illustrated in the attached?

Reachability on the X is a problem, especially for people with RSI and other hand mobility issues.

It would make Drafts a lot easier to use if these were just above the keyboard. And, just my opinion, but I think it looks neat.

I think an option to swap the position between top and bottom would be good.

Just for info as it wasn’t clear to me in your use of the term “reachability”; there is a feature available on iOS called reachability. This allows you to slide the top of the screen down to the bottom half of the screen to bring buttons, etc. within reach. This is available on the iPhone X.

Having the option to put the buttons at the bottom near the keyboard would be more efficient than using reachability, but reachability can still be of use when interacting with the text in the draft.

I know about the Reachability function. It’s a workaround for UIs designed for smaller screens. I think it’s about time we saw some major UI changes on iOS. Fingers crossed for iOS 12!

Do you find yourself using those buttons frequently?

I mostly use the swipe gestures, which don’t need to be at the top.

I get where you are going, but I think that idea kind of falls apart when the keyboard is hidden. It’s pretty easy to add a new draft button to the keyboard row, which likely serve 95% of why you would want easier access to those buttons - since the swipe gestures handle access to the drafts and action lists in a reachable way.

It’s primarily the new new draft and the tag buttons I use.

Can I add a tag from the keyboard row?

As for one the keyboard is hidden - yes, that’s a harder design question. I still think, in the long run, it’s worth working towards a UI that doesn’t have controls at the top edge of the screen. Screens are only going to get bigger.

The ‘processing’ keyboard has the ability to modify tags, flag, archive, etc your draft. That may help. 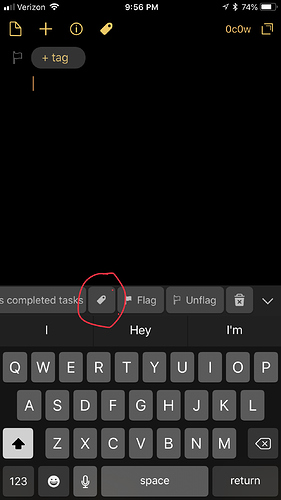 Cool. So now I need to add a new draft button to that one.

I’ll probably combine them with the Markdown keyboard which is where I mostly live.