Last night, working on my old 2017 10.5” iPad Pro I edited a duplicate of the Save to Evernote (cross-platform) action to save directly to a specified notebook named **Li Yih-Yuan”. Renamed the edited action @Li Yih-yuan and I worked perfectly. Now I am in my office, the edited action appears in my action list on my 12.9” iPad Pro 2020, but when I try to use it, I get the red warning message that something has gone wrong. What could be the problem here and how do I fix it?

I noticed that this device had not yet installed the upgrade from iPad OS 13.6 to 13.61. Just did the upgrade. Everything still green on this device. 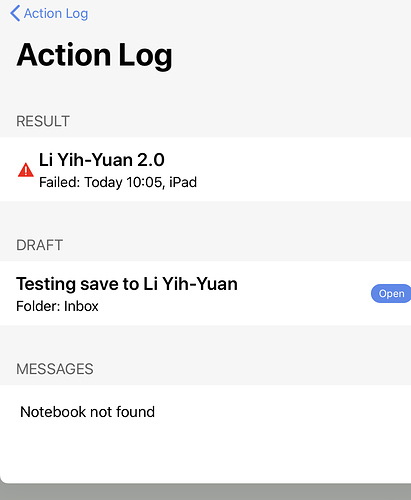 Try forgetting the credentials for Evernote. When you retry the action you should be prompted to enter them. Retest the action on both devices.

Thanks again. FYI, the Share 2.0 action works perfectly. Can it be modified to share tags as well as the draft itself?

The Save to Evernote (cross-platform) continues to result in an error message “Notebook not found”. Same result whether I leave the notebook unspecified or enter a specific notebook name. Off the top of my head I wonder if this I might be a language coding problem. I am typing in English on a made-for-Japan Apple folio keyboard, so the character codes might be different.

P.S. Not this morning on the 2020 iPad Pro but last night on the 2017 iPad Pro I got a different error message, telling me that I had exceeded the limit of calls to the Evernote API. This could have been because I was experimenting with applying the same action to multiple drafts. Seemed to work for a while then quit.

P.P.S. If I merge several drafts and use Share 2.0 to share the merged note, that doesn’t seem to be a problem. Will do as a workaround for my current workflow, exporting quotes from Kindle to Drafts 5 and using Drafts 5 to add comments before sending them on to Evernote.

Thanks again. Hope this information is helpful.